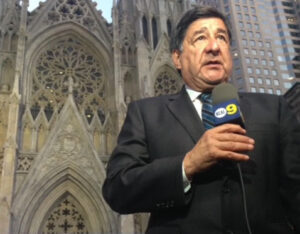 We are excited to bring you today’s episode with Dave Lopez. For fifty years if there was a story in Los Angeles, reporter Dave Lopez covered it. Fires, floods, serial killers, OJ, crooked politicians…Dave brought the stories that mattered into LA living rooms. He retired in 2020 after an unprecedented 43 years on the air as a reporter at KCBS Channel 2, Los Angeles. A talented journalist and diehard sports reporter, Dave broke barriers at a time when there were not even Spanish-speaking first responder firefighters or cops in the city, much less appearing on a major newscast. He credits his success to his upbringing in South Park, where he was raised by his parents, Tilly and Al, both of whom came to the US as children from Mexico. Dave’s father Al, a fixture in the neighborhood for fifty years, was the rock of his family. Sadly, Al fell apart when his wife of five decades was diagnosed with Alzheimer’s disease. Today, Dave will discuss his own diagnosis with prostate cancer, skin cancer, losing his wife to cancer and also how caring for elderly parents, particularly those with dementia or Alzheimer’s destroys not only the patient, but the family as well.

G WJune 24, 2021June 29, 2021
Over 2.3 million people worldwide suffer from Multiple Sclerosis. According to the National Institute of...
END_OF_DOCUMENT_TOKEN_TO_BE_REPLACED

G WFebruary 11, 2021February 11, 2021
Many of you have asked me what the secrets are to the workouts I use...
END_OF_DOCUMENT_TOKEN_TO_BE_REPLACED
Health Interrupted Podcast
FacebookTwitterInstagram